With her ritual Afro-Brazilian and gospel repertoire, Virginia Rodrigues has a rare charisma and inspiration in which the sacred is naturally evident. She spent her formative years singing in Catholic and Protestant church choirs: this forms the essence of faith that blossoms at each performance.

In the footsteps of the great lyrical singing legends such as Jessye Norman, or the jazz singer Billie Holliday, this artist from Salvador de Bahia has managed to conquer Brazil despite being black and poor, particularly with the patronage of Caetano Veloso. She sings the songs to the orixÃ¡s (Afro-Brazilian gods) in a completely unexpected way. Acoustic guitars, a cello and percussion enhance her singing and prove a deep attachment to her African roots. She performs the works of major composers of African descent with accuracy and authenticity. 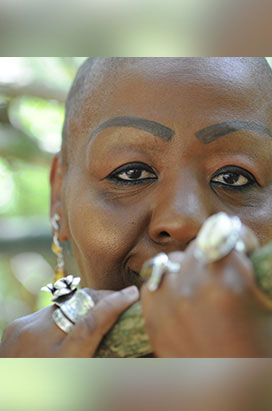