Night in the Medina 1

Irresistibly entrancing, the King of Ghosts is an epicÂ poem as well as an experimental jewel. This creationÂ invites young and old, music lovers and dreamers, filmÂ lovers and the curious to indulge themselves in anÂ abundance of music and images.
First among all marvellous filmmakers India hasÂ produced is the master Satyajit Ray (1921-92). InÂ 1968, Bengali Ray made The Adventures of Goopy andÂ Bagha, inspired by a tale written by his grandfather.

This is a story of initiation led by a visionary spirit.Â Putting it into film resulted in some psychedelic scenesÂ with special effects that were revolutionary at the time.
In this vintage black and white film, music is the trueÂ protagonist. Singer Goopy and percussionist Bagha have something in common: both have been excommunicatedÂ by their village because of their mediocre talent. Roaming in the forest, the King of Ghosts grants them threeÂ wishes. Thus armed with the power to look after themselves at all times, the ability to move instantly to whereverÂ they wish to be and a spectacular musical ability, our two heroes set off on a fantastic journey that ends at the kingâ€™sÂ court. Victorious in an improbable musical tournament, they manage to prevent the outbreak of war between twoÂ brothers, fighting off the forces of evil, re-establishing harmony between kingdoms and discovering love! Isnâ€™t thatÂ the miracle of music?
The film is little known in this part of the world. Soumik Datta, prodigy of the sarod lute, is half Bengali and halfÂ British but above all, a citizen of the world. He decided to work with the film as he saw in it a wonderful field toÂ explore.

“All little Bengalis grow up with Goopy and Bagha. And once weâ€™re grown up, we see its depths â€¦Released someÂ decades after the independence of India, the cultural revolution is at its heart: artistic creation gives us the powerÂ and energy to fight for just causes.” – Soumik Datta

Along with composer Johannes Berauer and drummer Cormac Byrne, Soumik Datta weaves sublime melodies thatÂ lie somewhere between folk and classic, orchestral textures and a contagious beat that engenders an astonishinglyÂ ethereal experience. The solo instrument takes on the voice of Goopy who, as if on a magic carpet, transports usÂ to a mythical world.
Part of the Homage to India 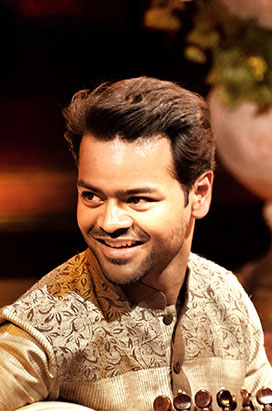