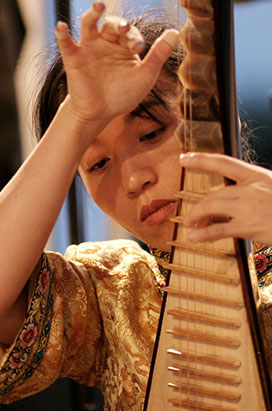 Destined to be a child prodigy, Lingling YU was born in the bay of Hangzhou in south eastern China. Showing a marked disposition for music, an ehru or violin and a pipa or lute were given to her at the age of 8. The documentary series Chun Lei (Little Musical Geniuses) was not wrong in making her one of its heroines.

YU’s formal apprenticeship ended when she won first prize in the national competition for traditional music; she was then 25 years old. Tours followed, and eventually the artist decided to move to Switzerland to explore the links between western and eastern music. Composers and conductors were impressed by her profile, enthusiasm and unusual curiosity and thus she began her international career.

Learning from master pipa players, including the living treasure Dehai LIU, her range of knowledge increased. Such solid foundations allows her to flow smoothly from one style to another. Her interpretation is underscored by exceptional technical mastery and is powerful, precise, warm and creative, characterised by clarity and finesse.

The tremolos YU achieves by rolling all five fingers over the strings, her pizzicatos, the play of harmonies and other tones all combine to create vibrant descriptions of various scenes. The repertoire of the pipa lies somewhere between ‘military music’ which dynamically describes legendary battles, and ‘literary music’ inspired by poetry, landscape and historical dramas.