Written and performed by Simon Elbaz

In French and Moroccan Arabic

Simon Elbaz, with his three-fold background (French-Jewish-Arab) and his four-fold talent (author, comedian, musician and singer), could possibly have been possessed by his character as he worked on bringing his village memories to life.

The action takes place in Morocco around the figure of Mchouga, alias Maboul. He is mad about the country, its best advocate. He speaks French, Hebrew and Arabic as well as the dialects used by the Jewish, Muslim and Christian communities under the French Protectorate. And he is the one who keeps a daily diary of events on the eve of independence.

‘Before setting up his halqa or theatre in the round, in the middle of the village, he passed by the mosque and then the synagogue, but the church? That was too far away for him!’

Dancing, playing the lute and chanting, this beggar-clown leads the spectator between hilarity provoked by scathing Jewish humour and despair before so much blindness. Simon Elbaz juggles with the three languages and offers different points of view with astonishing virtuosity. So this is how a theatrical game can emerge from ancient stories with a refreshing dignity!

Somewhere between the sacred and the profane, this evening of oral tradition is followed by a recital of Matrouz a capella song. Simon Elbaz aims to reconnect this Judeo-Arab heritage with the Jewish, Muslim and Christian cultural crucible that was the spirit of the golden age of Al Andalus. 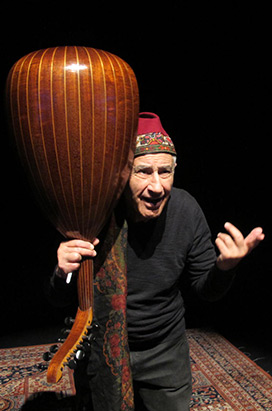