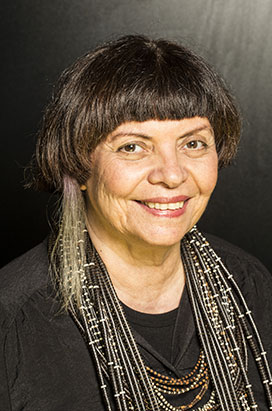 In the Brazilian language Kamayurá, the word Ihu means sound … all that penetrates our soul through our hearing, including the voices of spirits and of the magic entities of the forest.

～ Marlui Miranda, on her album of the same name

As this festival is paying tribute to the aquatic world, we are welcoming a little of the richness of the Amerindian continent. Marlui Miranda is of indigenous origin and is a symbol of this deep and harmonious world that is still linked to the origins of Time, and not assailed by the threat of ‘our world’.

Marlui Miranda has dedicated her life to the musical traditions of the Amazon, to the communities that formed them, and to creation. She works in different ways – as researcher, activist, composer, singer and musician but in reality, all become one. She brings to the world voices of the tropical forest, revealing the cultures, visions and initiations that nourish it.

Her creative projects weave organic sounds collected on the innumerable paths of Brazil and her voyage along them, and are celebrations of beauty as well as calls for peaceful resistance. Her voice and her flutes are an expression of a sublimated and yet living, mutant nature.

This great performer has shared the stage and recorded with many artists who have come to admire her: Egberto Gismonti, Gilberto Gil, Nana Vasconcellos, Rodolfe Stroeter, Jack DeJohnette and John Surman. In her treasure chest that she likes to keep open, is music from the people of Surui, Wayana, Apalai, Katxuyana, Tiriyo and Palikur, originally the federal states of Amapa and Tuyuka and the largest, Amazonas.

Marlui Miranda never ceases to inspire with her repertoire plumbing the depths of rivers and following the trace of springs.