FROM THE ARTISTIC DIRECTOR

Artistic Director of the Fes Festival of World Sacred Music

Water is the mirror of our future. 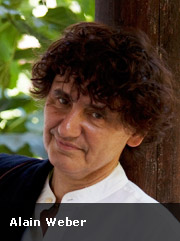 Impalpable beginning and carrier of life, water nurtures the imaginary as it traverses space and time.

This original fluidity embodies the infinitely small and the infinitely great, whether simple molecule or ocean depth. Its multiple forms arouse fascination and gratitude as well as fear. The source of life, means of purification and of regeneration, water is also the ‘mirror of our future’; in its wake we find inspiration and wisdom in various combinations.

Material and spiritual, these two aspects meld in a universal, cosmic vision that takes us back to the most ancient traditions and religions of the world: from the Koran to the Gospels, from the Torah to the Rig Veda. Thousands of tales and legends talk of water, sanctuary for fairies and nymphs, site of magic powers both benevolent and malevolent, related to the forces of nature.

In the Maghreb the well-known Aïsha Kandisha, that giant djinn who protects lovers, haunts rivers ready to lure the solitary wanderer or lost shepherd to her nocturnal beauty. In Fes, she is hidden within the waters of Oued El Jawahir (River of Pearls) which runs on the outskirts of the medina, under the bridge at Place de la Noriah, just behind Bab al Makina. In this square, inhabitants talk of a mystical dimension, leaving offerings of candles, bread, and a slaughtered black cockerel to appease the djinn.

The Andalousian Ibn Arabi wrote of the heavenly earth that was Adam’s: ‘there, gardens, paradises, animals and minerals are endowed with life and speech, and unlike the physical world, they are permanent, imperishable, immutable. Their universe does not die.’

Right now, we are very far from this heavenly earth. Frenetic consumption in the world generates denial and amnesia: the fragile nature that is so violated has reached the very depths of its foundations. Between now and 2020, two-thirds of wild animals will have disappeared. Most of us are indifferent.

The bustan (orchard or garden) – be it Andalusian, Arab, Indian or Persian – was modelled on the Garden of Eden and reminiscent of the genesis of humanity before the Fall. With its plants and trees flourishing thanks to the water of life, it evoked the memory of and quest for the lost paradise.

Architect Aziza Chaouni explains that Fes has not been spared: ‘The city’s past is intimately linked to its watercourses. They have allowed the city to grow and prosper. They have irrigated the gardens and orchards and turned the waterwheels and mills. They have fed many outdoor public fountains as well as those in hammams, mosques, saints’ shrines, theological colleges and fondouks or caravanserais. Unfortunately, most of these fountains today either do not work or have run dry because of the degradation of the hydraulic system, pollution and the depletion of groundwater.’

This year’s Fes Festival encourages us to see the connection between our origin and our future: a future that is compromised unless we recognise its dependence on the environment so truly impacted by events. Drawing on a vast repertoire inspired by water, the musical programme is, above all, a hymn to nature, to the maritime and oceanic worlds featuring, amongst others, the flamenco symphony Poeta by the great guitarist Vicente Amigo, artists from the islands of Japan, Sardinia and Crete and a tribute to the great rivers of the world, the vital arteries of our planet.

The opening concert explores the world of water with both ecological and spiritual intent. It evokes in turn the fountains of Fez, the Amazon as emblematic of primary forest, the language of the Amazigh whistlers of the High Atlas and of the Canaries, Noah’s Ark and the flood, and the desert oasis so beloved of the Sufi poets.

In collaboration with the French Institute in Fes and particularly aimed at schoolchildren, a village café as found in Upper Egypt is presented, with traditional Saïdi music, dance, magic and a film-screening featuring young musicians from the Nile.

This festival is a journey of initiation with traditional music, poetry and dance as its melody. The sacred is the link uniting man and nature, as Claude Lévi-Strauss suggested, for whom the sacralisation of life was a primary condition of ecological preservation. After all, isn’t music the prolonging of this invisible link, taking us back to the very beginning of time, to the cosmogonic age, when man relied on the divine to order every detail of his daily life? And what’s more, to explore the music of the other engenders discovery of the self. To listen to the unknown is to enter a little deeper into the mystery.