WU OPERA OF ZHEJIANG – From the origins of Chinese opera

With the participation of the Wu Opera of Zhejiang 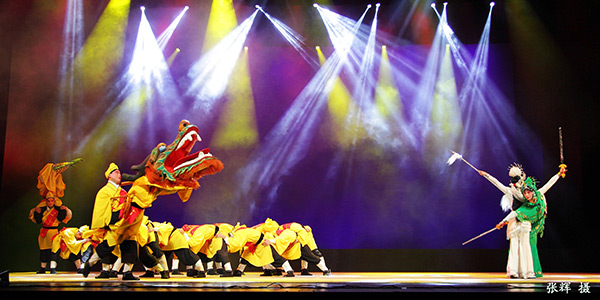 The ancestry of the well-known Peking Opera lies with the Wu Opera, originally from Zhejiang. Telling of everyday life, it charms and captivates in this mountainous region of the south-east. The brightly coloured costumes, powerful voices and acrobatic performances of wandering artists all contribute to the happiness of the peasants. A local saying goes ‘when I hear the sound of its gongs and drums, my legs start to dance!’.

At every event, be it a birth, an anniversary or a prayer, the villagers club together to invite the best Wu Opera troupe. The festivities last for several days and feature rituals, incense and candles. The opera itself is an offering to the gods. Here, exclamations of joy combine with the cymbals and drums in a theatrical setting full of life and colour. When the troupe arrives in the village, everything stops!

The Wu Opera is more than 400 years old and takes its name from the old city of Wuzhou (now Jinhua). Some of the dances go back to ceremonies from the Shang and Zhou dynasties of more than 3000 years ago. The Zhejiang region is found along the flourishing trade routes for salt, silk, lacquerwork and porcelain. This trade benefitted the local troupes who were committed to offering more and more elaborate works while remaining accessible to the villagers. Wu encompasses the largest repertoire of songs from traditional operas and mobilises the qualities required for martial arts.

The troupe invited to Bab al Makina was founded in 1956 and has actively participated in historical research into Wu Opera. It has collected more than a thousand works and re-established associated crafts such as masks, costumes and make-up. Directed by Chen Mailan, Wu Opera has won honours on many occasions, notably winning the prize for non-tangible cultural heritage.

This programme draws on the rich imagery of Chinese mythology which itself is strongly inspired by the theme of water. In the watery world of rivers and seas, genies, serpents, dragons and even the Monkey King himself, do battle.