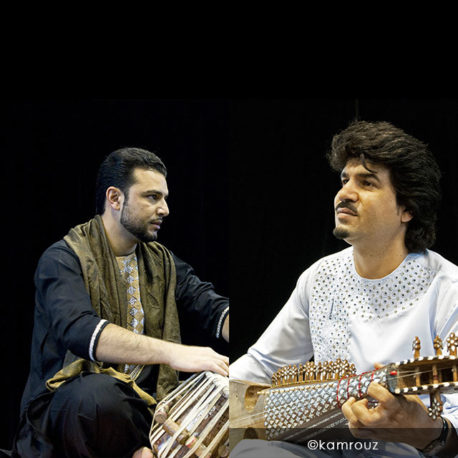 If ever a pious man lets himself go to the sound of rubâb, he will abandon his prayer mat for this instrument.
Afghan proverb

Homayoun Sakhi is a musician whose destiny is tightly allied to that of the rubâb, the iconic lute of Afghanistan, whose mercurial, incisive sounds inspired the sarod of classical Indian music. Called ‘the lion of instruments’ it been written about in Persian literature since the 7th century. This plucked stringed lute features a sound box carved out of mulberry wood that is covered in goatskin. Its 11 sympathetic strings give it a certain acoustic depth that allows the artist to shape the sounds to evoke the mountain wind or a palace breeze. The rubâb family is extensive, with some differences, from Uzbekistan to Iran via Tajikistan, where it is known as rubâb-i-Pamir. The companion of Guru Nanak, the founder of Sikhism, liked to play one. In Afghanistan, historic crossroads of Persian, Indian and Asian civilisations, it is often called the Kabuli rubâb.
Homayoun lives the passion of his heritage that has given him the vocation to breathe new life into the musical instrument. Just as Zakir Hussain raised the tabla to a universal instrument, so Homayoun takes his inspiration to California where he now lives, to better serve the art that preceded him.
Homayoun’s rubâb playing is incandescent even for traditional music, a mixture of raw magic and high sophistication, reincarnating the soul of an era and turning it to the movement of today’s world.
Also including established tabla player Siar Hashimi, this concert at the peak of the art of improvisation promises to be memorable.