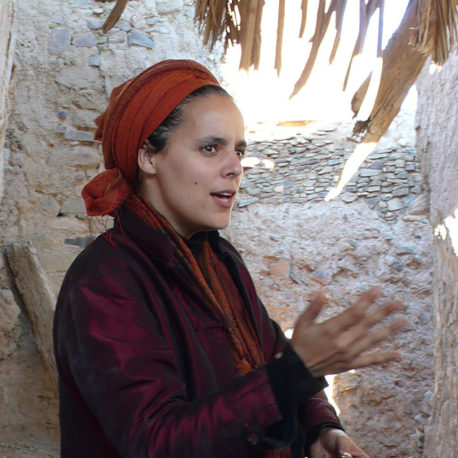 Salima Naji holds a doctorate degree in Social Anthropology  from the  Paris « Ecole des hautes Etudes en Sciences Sociales ». She is a renowned specialist of constructed heritage to which she has devoted several works. Intervention on ancient constructed rural heritage has been of special concern to her, especially in its dimension of original documentation, with ksours, kasbahs and collective granaries, as well as the enhancement of these constructed architectural fragments within their lanscapes. A Dplg architect from the «Ecole d’architecture de Paris-La-Villette », Salima Naji also reuses bio-based material in building and earth technologies or stone, adopting an innovative approach that respects the environment. Her projects, of service to the society (maternity wards, cultural centers, women’s homes, schools, etc.) aim at reducing the destructive impact of starndard architecture that has currently been prevailing, and providing the destitute with a quality public space.

Abstract : Because of their highly symbolic dimension, oasis spaces constitute places for reflection on heritage, and the present and the future of human societies. They are evidence for the ability of man to construct a livable and viable environment  over centuries, despite extreme climatic constraints. Agriculture and building are closely linked here, around the stone of earth and of the palm tree. They, therefore, constitute a source of inspiration to reflect on the sustainability of modern constructions. The ideal was to underline the value of ancestral technologies, originating from raw soil and stone, to show the resilience of this so-called vernacular architecture. In the various social, « modern » projects, in particular, built with stone, earth, and palm-tree fiber, so-called traditional implementations are revisited, as tradition implies constant innovation as we all know, for so-called « modern » uses. This is because, for us, there is no difference between contemporaneity and the past, only egigency has changed : ancient people used to make their life at risk through inadequate building and the modern people are more negligent on the question of the rules of the art… Today, we build swiftly, we  nuild badly and we give no attention whatsoever for renewable energies. We overconsume  concrete in the name of earthquake resistance or strauctural norms. The question of reoccupying sites which have proved their worth in the past, and using techniques which do not exclude innovation, is, without a doubt too good to be overlooked. Going back to the wisdom of ancient people should allow us to develop a strategic vision for better living in the future.