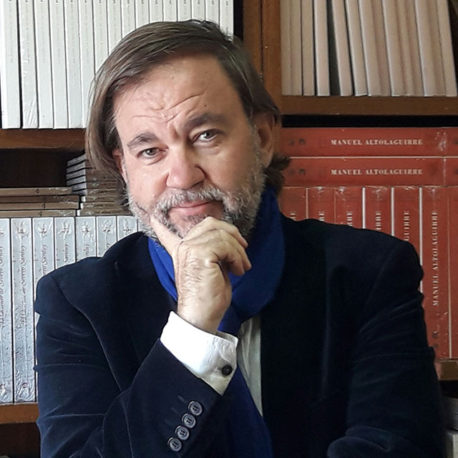 Javier Galván Guijo is an architect who graduated from the Madrid Technical High School of Architedture (1980). He received a doctorate from the same institution (2004) and a Master degree in Architechtonic Intervention and Restoration from the Madrid High Centre of Architecture (1991)

From 1981 to 2001, he was an architect and achieved several projects and works in various countries, with special reference to domains of architechtonic restoration and social architecture for the tourist sector.

He has been deputy chairman of the NGO «Restaurateurs sans Frontières ». He has also been in charge of the Work and Maintenance  of « Instituto Cervantes » (2006-2008) and professor at the University of SEK, Segovia, as well as a member of the « Junta Directiva » (Executive Council) of AEEP (« Spanish Association of the Pacific Sea Studies »).

He has authored some thirty publications and participated in, and given, over a hundred courses and lectures on themes related to architechtonic and urban heritage, and in relation with culture and other Spanish languages and their future projection at the international level.

He is Doctor Honoris Causa in the  Humanitiess from the University of Aquinas de Albay (Philippines, 2005). He was awarded the « Order of Merit » by the President of the Philippines (June, 2006), as well as the Medal of the Cross Order of  Isabel the Catholic, awarded by King Juan Carlos I of Spain (December, 1999).