Throw open the doors to an enchanting night of Indian music and abandon yourself to an atmosphere both contemplative and exhilarating.
The gifted artists for this special night come from Kolkata, Chennai, Mumbai, Jodhpur and Jaipur, as well as from cities of the Indian diaspora: London, Manchester and Toronto. Most of these young masters of Hindu and Carnatic music are performing for the first time in Morocco and for some, it is their first performance outside the sub-continent.

A globetrotter with a staggeringly long discography, Irshad Khanâ€™s powerful dexterity is impressive. He comes from an awe-inspiring line: son and pupil of Ustad Imrat Khan, himself the younger brother of the great Ustad Vilayat Khan of the Imdadkhani Gharana (north Indian school of sitar and surbahar music) which played for the Mughal courts for over 400 years. Irshad plays with a superb mastery and prowess of great endurance. He imbues his performances with enormous energy. His taan (the singing of very rapid melodic passages) flirt with the speed of light, then suddenly become transcendently sweet.

As part of Â “Homage to India.” 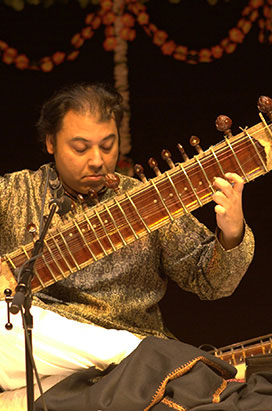