Wise women, mystical women, poets and enchantresses twinkle like stars in the Milky Way, revealed in this show as a song. Founders not only of Islam but of other ancient cultures, the women of the Orient lead us on a journey of discovery into the history of Morocco and into the myths of the East. 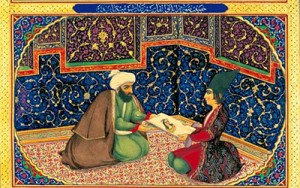 As night falls, it is the mystical Sheherazade of Oriental tales who carries us from one world to another, from one sky to the next. She embodies the wisdom at the very source of imagination, the true art of the dream.

Sheherazade is a bold, resolute and cultivated woman who has mastered the knowledge of her time: history, literature, poetry and politics. To save the women of the kingdom, she risks her own life by joining the harem of King ChahryÃ¢r, a damaged man who has become vindictive. Sheherazadeâ€™s tears are her promise: with magical effect, she hopes to win over the Kingâ€™s heart by the end of these nights. At the beginning, she tells the stories to her young sister DunyÃ¢zad as a diversion. Played by a young Moroccan student, DunyÃ¢zad is initiated into the recitation of all these legendary women whose light shines like a thousand stars.

Mystical poets from the Indian Mira BaÃ¯ to the Iraqi Rabia al Adawiyya al Qaysiyya, and the pre-Islamic Bedouin Al Hansa; mythical wise women such as Balqis, Queen of Sheba who confronts King Solomon with her wisdom, as well as the slave Tawaddud Al-JÃ¢riya, illustrated by the giant African puppets, who challenged the sages in the court of Haroun Al-Rashid â€“ all of these lead us on a voyage through poetry, song and dance, highlighting the idea of knowledge and understanding as symbolised by Oum El Banine (also known as Fatima El Fihriya) who founded the Karaouine mosque and university in Fes.

Rebellious women from old Morocco are here too, those from Tetouan and the Amazigh women of the Atlas, when the veil emerged as an expression of revolt against the occupying forces.

Enhancing the path through A Thousand and One Nights are horsewomen poets from the Mongolian steppes, musicians from the court palaces of Azerbaijan and the voices of Persian Sufis. They all show that Reason is the result of piety and faith, as shown in the old stories, reinforcing the idea of feminine wisdom full of grace and inspiration.

The walls of Bab al Makina are transformed by moving images (known as mapping) and become the celestial vault under which Sheherazade captures our imagination with these great women, so that we become eastern princes for a night. For each one, a shooting star appears in the sky across the great door of Bab al Makina like a shining spirit, materialising into an exceptional woman. This sparkling light envelops the stage â€“ symbol of light in both a spiritual and intellectual sense, the opposite of darkness.

With the support of the International Mugham Center of Azerbaijan

Dance of the veils, Tafraout

With thanks to Edith Nicol, Hafida Bensouillah, Michel Le Bastard and Caroline Bourgine 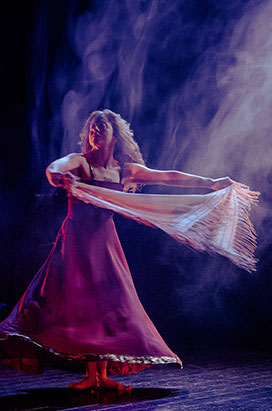 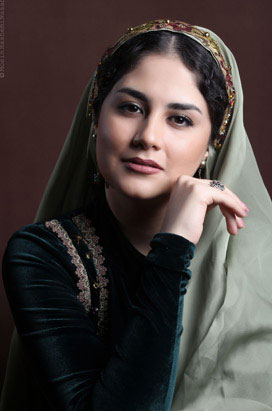 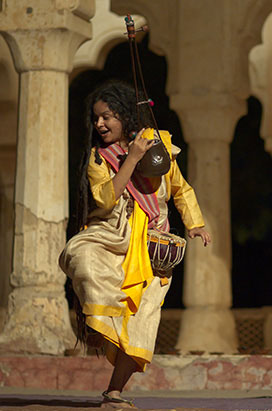 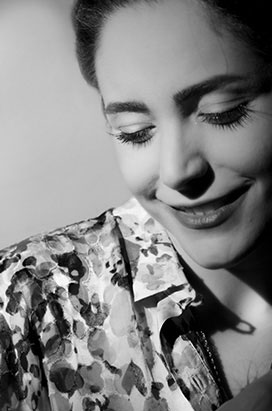 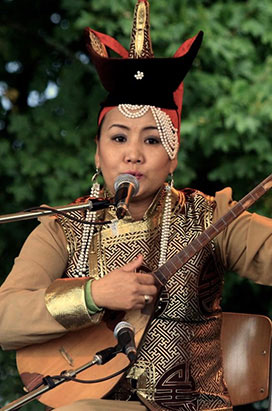