We have fallen into the place where all is music.

The strumming and the flute notes rise into the atmosphere, and if the whole world’s harp should burn up, there will still be hidden instruments
playing, playing.
This singing art is sea foam.
The graceful movements come from a pearl somewhere on the ocean floor.

This encounter between two great Sufi music traditions is a tribute both to the great Djalal Eddine RÃ»mi whose poetry is still read today across the world, and to Moroccan samaÃ¢.

SamaÃ¢ teaches the absolute primordial sound, engendering the Word of God. For a number of tarÃ®qas, spiritual listening (al-samaÃ¢) and the practice of ritual dance (al-hadra) produce ecstatic phenomena (hal) and trance. Today samaÃ¢ is practised by those on RÃ»miâ€™s path, the Ottoman Mevlevis, as well as by the Arab Mawlawiyya and numerous brotherhoods across the Maghreb. Morocco is an important guardian of this tradition.

As musicologist Sami Sadak noted, the history of Turkish religious music is closely allied to the various successive capitals of the Turkish Empire. In the 13th century, Konya became an important cultural centre under the reign of the Seljuk Turks thanks to MevlÃ¢na Djalal Eddine RÃ»mi, who placed a great deal of importance on music in his philosophical and spiritual teachings. His approach was furthered by Chams Ed-Din Tabrizi who encouraged the worship of God through the arts. The MevlevÃ® rite recorded by his son, Veled Sultan, is perpetuated today in the tekke (monastery) at Konya by the Ã§elebi (superiors) who succeded him. The foundation of the order of Mevlevi whirling dervishes at Istanbul has left its mark on a musical tradition that is meditative and trance-like.

The whirling dervish, his arms outstretched with the right hand open to heaven and the left directed to earth, is a channel of divine grace. This magic must be experienced: men and women in wide white or coloured skirts whose turning symbolises the movement of the planets and the stars. 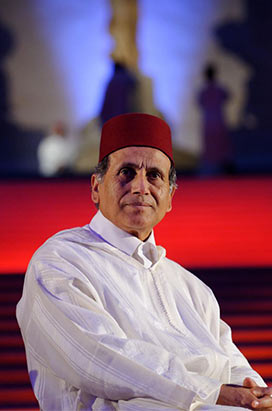 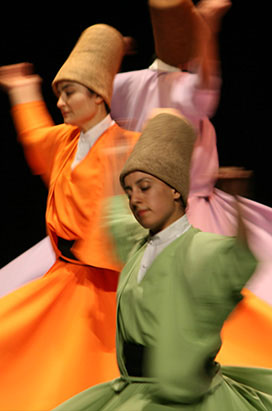