Although it was only towards the end of the 18th century that current Iraqi maqÃ¢m was defined, one still dreams of the sumptuous epoch of the Abbassids of the 8-13th centuries. Lying at the heart of the ancient land of Mesopotamia, Baghdad â€“ the country between the two rivers, the Tigris and the Euphrates â€“ was home to a universal Islam within the confines of the Arab world, both Turkish and Persian. This is still seen in the tchÃ¢lghÃ® baghdÃ¢di ensembles.

These ensembles are principally characterised by their use of the santÃ»r, a hammered dulcimer similar to that used in Persian tradition, and the djÃ´za (the name of the soundbox made of coconuts, djÃ´z al-hind, or â€˜Indian nutâ€™), a four-stringed fiddle which is today replaced less than satisfactorily with a western violin.Â  These two instruments of great acoustic delicacy give the Iraqi tradition an enigmatic perfume of the far-off Orient.

The term maqÃ¢m (literally a location or place) refers to a type of music possessed of a particular mood or feeling. In the classical music tradition of Iraq, it means simply a song which masterfully develops a wide range of emotions through its 23 modes. After a short instrumental prelude known as the muqadimma, the art of the qÃ¢rÃ® (singer or reciter) consists of delivering some rich verses in the tradition of the qasida, a type of Arab poetry that continues to inspire great contemporary poets.

Farida Mohammad Ali was born in Kerbela, a mythical Shiâ€™a village in southern Iraq, where the tradition of women singers was permitted. Accompanied by her tchÃ¢lghÃ® baghdÃ¢di ensemble, she expresses the refinement of the ancient courts as well as a rich popular repertoire. 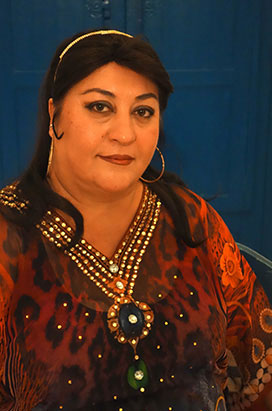