Night in the MedinaÂ  II

Founded by singer and musicologist Katarina LivljaniÄ‡, the Ensemble Dialogos interprets the sacred music of medieval Europe. Combining profound musicological research with great strength on stage, their work carves out a new approach to ancient music by giving a contemporary feel. In this brand new repertoire, the group explores theatricality as well as plain chant and the first medieval polyphony, with a particular interest in the southern Slav region.

In this work, Dialogos encounters traditional musicians and are some of the youngest heirs to the epic songs of Bosnia and Herzogovina, a country on the threshold of the Orient. These poignant, bitter songs intertwine with musical theatre, inviting the public to enjoy the unusual beauty of rituals of life from birth to death, both pagan and Christian.

Dialogos is supported by the DRAC Ile de France â€“ Ministry of Culture and Communication.

With the support of the French Institute of Morocco. 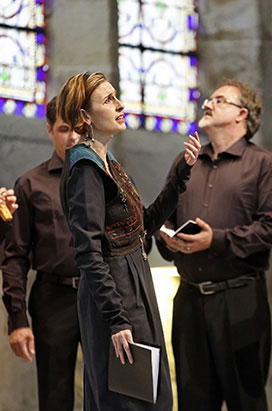