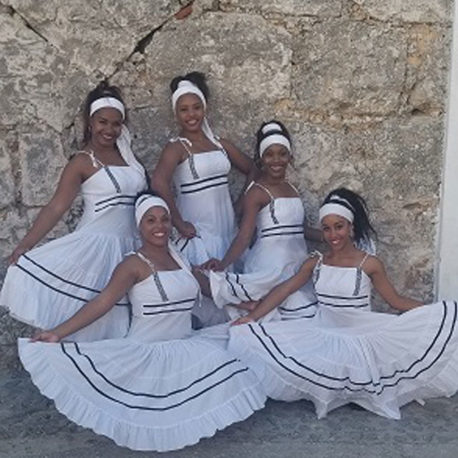 Ritual songs and dance of the women of Santeria

As we sometimes think, in the world of percussion, it’s not just strength and speed. It is above all a question of technique and taste.
Raul Fernandez

Twenty-five years ago, three women dancers from the Cuban National Folkdance Group formed Obini Batá, defying the exclusively masculine tradition of percussionists. They became the first women to play the batá: the two-headed drum made of goatskin found in Santeria, the Afro-Cuban religion. Cuba is the only country that retains these drums taken by Nigerian slaves to Trinidad and Tobago as well as to Brazil. These drums come in three different sizes: the Iya (largest), Itotele (medium) and the Konkolo (small), have an hourglass shape and must be made from one single piece of wood.
The Obini ensemble (which means women in Yoruba) tells the story of one of Cuba’s most influential instruments, to the chagrin of its detractors who are outraged that women, considered physically and emotionally unsuited, dare play these three sacred drums, the favourite drums for communicating with God outside religious ceremonies. This ensemble, then, embodies the relentless fight toward larger acceptance of the deserved place of women in the world of percussion and to redefine the stakes around the batá and its musicality.
Religious tradition has it that a week before playing in a ceremony, men were not allowed to touch a woman as their spirit would be weakened with such contact; this was part of the ritual. Obini Batá, through the power of their playing, proclaim the nonsense of such eminently sexist beliefs. Despite their affirmation of the non-religious nature of their artistic performance, despite the major musical expressiveness of the batá drum, the passage from religious to secular was very difficult to admit and female percussionists are still banned to this day, by traditional Afro-Cuban priests who perceive their practice sacrilegious.
Held in the hearts and memories of slaves brought to Cuba more than a hundred years ago, the music of the batá drum transports us to the rhythms and pulsations of conversations in African villages. Like these, the six-handed drum speaks a mysterious polyphonic language. Its voice seems to call the orishas, the spirits of Santeria: Eleggua, the link between the dead and the orishas, Yemaya, divinity of the sea and source of all life, Oya, orisha of the winds, Oshun, orisha of love, ObBatá la, orisha of harmony and of course Chango, orisha of music – to come down to talk to mankind and even to possess them, while clothing and coloured scarves spin in frenetic dance.
The multi-generational group from Havana is made up of Eva Despaigne, the sexagenarian Maestra and the last of the founding members, and five young women from various artistic and professional backgrounds which explains the extraordinary versatility of their performance, somewhere between a theatrical game, song, music and dance. Eva maintains a long-term vision of the role of Obini Batá with two precise ends: the first to constitute a creative kernel that can train new artists, and the second to represent a platform that defends women’s rights in a society faced with gender discrimination, keeping the faith with the legacy of Rumba Morena, Andrea Baro and many other women’s groups of Cuban rumba.