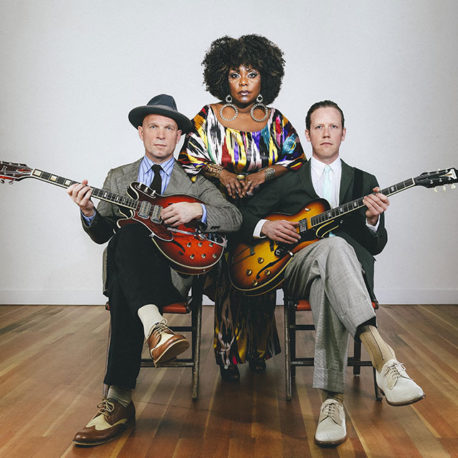 African-American history, from slavery to evangelism, from segregation to the civil rights movement, is one of sorrow, injustice and revolt, but equally one of resilience, enthusiasm and relief. Faced with the vicissitudes of life, gospel music, that ode to hope, impetuous manifesto for faith in a humanity worthy of reconciliation and forgiveness, is embodied in the lucidity of the soul resistant to its rapture.
The voices of iconic divas of black music, from Odetta, Sister Rosetta Tharpe and Mahalia Jackson to Aretha Franklin, have maintained the sacred depths of gospel without betraying its vehemence, with the introduction of masterful electric guitar. While between the bar and the small village church the everyday blues of no future crisscrossed, in total enmity, with the beginnings of liberating gospel – the blues of the Mississippi Delta and of Chicago, of Blind Willie McTell and Woody Guthrie, representing misery, alcohol, criminality and debauchery, Michelle David and her group decided that in the footsteps of Thomas Dorsey and Sam Cooke, they would break down the genre rifts enveloping their gospel lyrics of rhythm and blues, soul, jazz, afrobeat and funk.
‘Music that feeds the heart and soothes the soul’ is how Michelle David describes the quintessence of their music. Michelle David & the Gospel Sessions is made up of Michelle David (voice), Onno Smit (guitar/bass), Paul Willemsen (guitar/bass), Bas Bouma (percussion), Luc Janssen (trumpet), Lucas Van Ee (tenor sax) and Dirk Zandvliet (baritone sax). The group took its first steps when Dutchmen Onno Smit and Paul Willemsen went back to the origins of soul and rhythm and blues, a quest that led them to the first recordings of gospel songs. In Michelle David, who was singing in New York churches from the age of four, they recognised a vocalist with an incredible stage presence, ideal for their project.
Thus in the eternal journey from the north to the south of the US, from Detroit, city of Marvin Gaye and Diana Ross, via Chicago and ending in Louisiana, they agreed to come together. In a message of redemption, love and hope in the face of adversity, the classics of the genre – I’m a soldier in the army of the Lord, There’s a light in my life shining over me – are revisited with devastating groove, with an energetic brass section and bold arrangements. The magnetic force of this divine diva, the volcanic power and spiritual sweetness of their gospel with its retro feel, bring a new dimension to the accepted genre and surpass it in prayer swaying on a swing of alleluias.