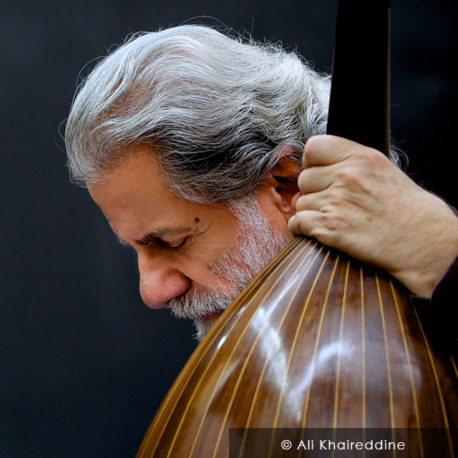 The sky is far from the sea … I am far from my words
On the last evening on this earth.
Mahmoud Darwich

Marcel Khalife was born north of Beirut in 1950 into a family of Maronite Christians. He lived among the fishermen, peasants and gypsies in a community that was as much Muslim as it was Christian. Today he calls himself an Arab, ‘a Palestinian in Palestine’, and was named a UNESCO Artist for Peace for his work on musical heritage. Avoiding all fundamentalist temptation, his songs are close to the poetry of Palestinian Mahmoud Darwich and relate to the permanent quest for freedom and an interrogation of his roots.
Accompanied by a large orchestra, Marcel Khalife sings Arab songs that he usually performs with an expertly-played oud. His songs are now part of Arab musical heritage as he upholds the reputation of an artist of majestic performance. Like Mahmoud Darwich, his work is universal because it is sensitive, artistic and thoughtful, at the junction of political commitment and purely artistic approach. His most beautiful songs, full of metaphors faithfully translated into notes and rhythms, such as Montasiba Al Kamati Amchi, Ommi, Ya Bahriyé and many others, are here revisited with new arrangements and other styles that lead him into different musical worlds without letting go of the very essence of his inspiration. Respected across the Arab world, beyond political or religious affinity, everyone knows and indeed has hummed along to at least one of his songs. In Morocco, every one of his concerts is a true celebration of music that is deeply spiritual and powerfully unifying.