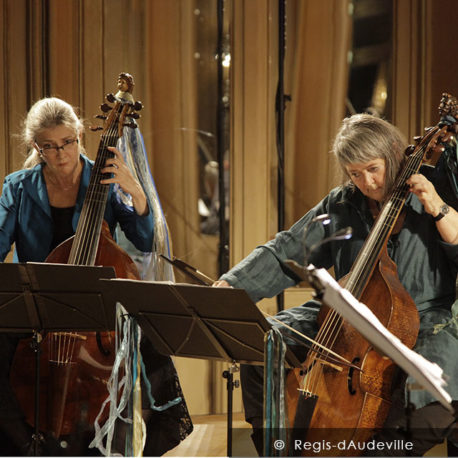 The art of the viola da gamba

The delicacy of Song is its spirit, approaching so close to the Voice that all the instruments must imitate it.
Jean-Jacques Rousseau

The viola da gamba is a bowed, stringed musical instrument in its heyday in the 17th and 18th centuries in Europe. It belongs to the viol family of instruments held between the legs. Overthrown by the violin family at the end of the 18th century, the viola da gamba again became popular with the public thanks to the intimate, warm nature of its delicate sounds.

As Jordi Savall, the instrument’s illustrious representative, tells us, in 1637 Marin Mersenne explains in his Universal Harmony the important relationship between the viola da gamba and the human voice:
Certainly, if instruments are considered in proportion to how well they imitate the voice, and of all the artifices thought of as of advantages, that which is the most natural, it seems that we cannot avoid giving the prize to the viola da gamba that mimics the voice in all its modulations, even its most significant inflections of sadness and joy.
Les Voix Humaines is the most famous piece of the Second Book of Music for Viola da Gamba, composed by Marin Marais, the renowned viol player and composer who, under Louis XIV, greatly enlarged the repertoire of this instrument. However, the name Les Voix Humaines also belongs to a duo of gambists created in 1985 in Montreal by Briton Susie Napper and Canadian Margaret Little. Specialising in a repertoire of Baroque chamber music and early music, this ensemble has become a world-wide reference point for the music of Saint Colombe. However, not content with the exploration of just one particular oeuvre, they also present a wide range of the greatest names in viol music. Known for their arrangements of a wide variety of music and their brilliant performances of ancient and contemporary works for violas da gamba, they have successfully adopted the Baroque tradition of adapting pieces originally written for other instruments, well aware that the greatest virtuosos of the time did not hesitate to do the same. If Bach could arrange Vivaldi, then why shouldn’t they arrange Dowland, Rameau, Couperin, Marais and Bach?
It is grace rather than beauty that this duo seeks in playing this instrument of kings, whose refinement is matched only by majestic silence.