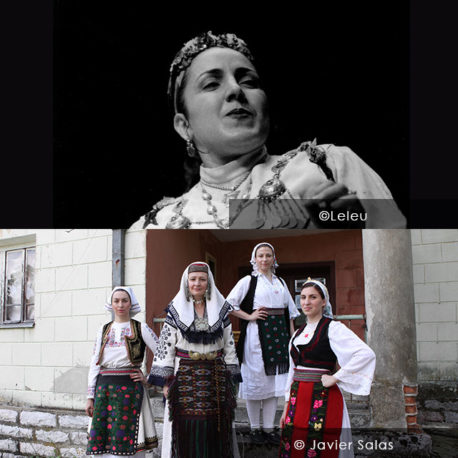 Songs of the Mountains, from the Balkans to the Middle Atlas

Between the shores of the oceans and the summit of the highest mountain there is a secret road that you must travel ere you become one with the sons of earth.
Khalil Gibran

The pastoral voices of the Serbian and Berber mountains echo in this unprecedented encounter between Svetlana Spajic and Cherifa, both iconic figures in the transmission of oral heritage.
Svetlana Spajic has deep roots in the music of Balkan lands. Taking the repertoire of traditional songs of the former Yugoslavia, she represents today the revival of traditional Serbian song. Her expertise is based on demanding ethnomusicological collection research that led her to master the characteristic micro-intervals of Serbian a cappella song. Over the years, this vital quest led to losing herself in the heart of the mountains, in Serbian, Bosnian and Croat villages, where oral repertoires have been transmitted with little outside influence. It is this immersion into the daily life and into the immemorial imaginary world of these country people that transforms their artistic practice into a major act of preservation of intangible heritage. The songs tell of epics, of weddings, harvests, gatherings and religious processions through which the shadows of sadness, love, journeys and dreams all pass. Traditional Serb motifs can be found here such the green apple tree where the falcon sits on a branch, the lovers’ marigold flower, the healing of the peacock, the avalanche that snuffs out the life of mountain shepherds, the pine trees whose frozen roots gave birth to the Danube with the moon in its branches and the stars at its top, and the old zapis oak, symbol of power, memory and prayer.
Singers and dancers, the Cheikhats are from the Moroccan Middle Atlas Mountains. Some of them become solo singers in their own right, perpetuating a poetic tradition that they have appropriated over time. Cherifa was a young peasant girl of the mountains when she was discovered by the great master and singer Rouicha, with whom she sang for a long time before making her own way. The oral heritage passed from generation to generation, known as the tamawayt, is used by Cherifa, along with a lothar lute, to sing the words of village poets, of rejoicing and suffering, where both the oriental and African colours of Berber music spring up.