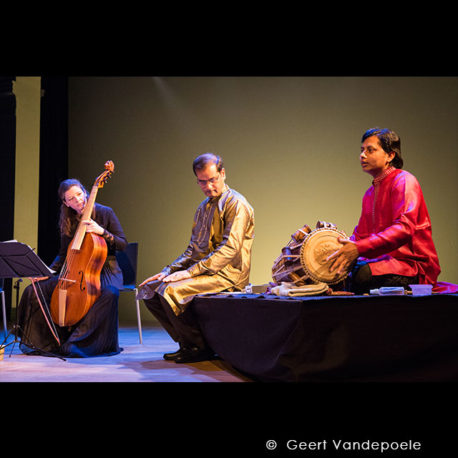 HATHOR CONSORT, UDAY GHAWALKAR & PRATAP AWAD
FROM ELIZABETHAN ENGLAND TO THE COURTS OF THE MUGHAL EMPERORS

A bubble in the current,
This is your life that is passing!
It shines for a moment, then fades
Like a star at dawn.
Kabir

The Dhrupad Fantasia was born of the idea to create a marvelous universe, a visionary idea bathed in the magic of linking raga-based improvisations with polyphonic instrumental music, both of which originated in 16th-century court music, between East and West.
Sacred dhrupad song (from dhruva – the polar star, and pada – a musical composition) is the oldest genre of Hindu classical vocal music, stemming from the recitation of hymns and Vedic mantras dating back 2000 years. In the 16th century, the practice of dhrupad continued in the courts of the Mughals in northern India where it became a very popular form of classical music. Dhrupad reaches to the essence of sound and tone between worship and spectacle, encouraging meditation. The yoga of sound, its vocal breath gives us precisely the impression of wandering in the depths of the immense cosmos and tasting Amrita, the nectar of immortality.
The fantasia was a popular polyphonic composition for consort – an instrumental or vocal ensemble – during Elizabethan times in England. It was born of the art of improvisation, its form and inventiveness springing ‘only from the fantasy and skill of its author’ (Luis de Milán, 1535-1536 ).