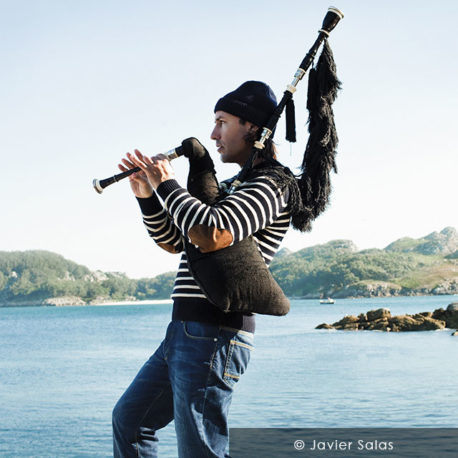 Oh, the dear and distant eyes of sailors, the salt-water eyes of Bretons, the well-water eyes of Celts! Eyes in which there are skies, vast expanses, dawns and twilights contemplated at length upon the open seas, the mountains or the plains; eyes into which have passed, and in which remain, so many horizons!
Jean Lorrain, Monsieur de Phocas

Known by the Romans as ‘the country at the end of the world’, Galicia was inhabited by Celts from the 8th-3rd century BC. It’s no wonder, then, for Carlos Núñez and Alan Stivell, as they walk along these beaches, to realise how much their fraternity is immemorial: the same legends, the same hidden villages, the same ports from which one sets sail for over there, the same washerwomen of the night … Brittany, that other Finistere, Carlos Núñez calls it his ‘second home’.
Both prince of Galicia and Celtic king, master flutist and prodigious piper, dubbed the ‘Jimi Hendrix of the gaita’ – Carlos Núñez is rehabilitating, after the Franco wasteland, the richness of the musical identity of his country: flamenco, early Galician song and the Andalus music of the Maghreb, all three with common roots. As a true musical ambassador and pioneering alchemist, he takes inter-Celtism and explores unsuspected connections in a journey of initiation to the heart of oral traditions. Mexico, Cuba, Argentina, the Basque Country – all are linked to the destiny of the Celtic story.
Like the peoples, this national instrument, the bagpipe, has also travelled from the Iberian Peninsula, spreading according to invasions or expansions: the gaita was the first instrument imported into Brazil in the 17th century. ‘The future of Celtic music is to be found in the Americas,’ says Carlos Núñez, displaying the Celtic utopia he has created in the universal imagination. During this long journey, he is surrounded by companions at arms such as The Chieftains, Sharon Shannon, Bob Dylan, Jordi Savall, Vicente Amigo, Luz Casal and even the Buena Vista Social Club.
While his fingers move at a dizzying pace on the wood of his bagpipe, a delirious, effervescent joy bubbles up and fills the lungs with an air of frenzy, leading to the crest of exaltation, exhales the breath of universal liberation and propels the pastoral traditions of Galicia and its Celtic counterparts into a mystical, intuitive and deeply intoxicating dimension.