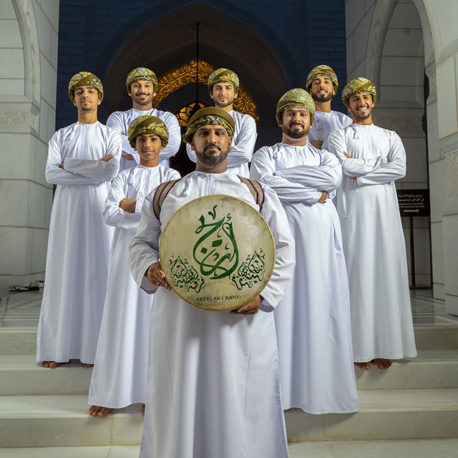 This singing art is sea foam.The graceful movements come from a pearl somewhere on the ocean floor.

The Sultanate of Oman is anchored in a great Arab tradition that turns majestically to the immensity of the Indian Ocean towards Zanzibar and Persia. Its high villages in ochre colours, its proud mountain escarpments, its population of mythical gazelles and leopards make this country the last ecological paradise of the Arabian Peninsula.During the Sumerian period, Oman was known as Magan. Its incense was sold in Mesopotamia, Egypt, Persia and from India to Dilmun (today’s Bahrain). Oman was Islamised during the lifetime of Mohammed in the 7th century. In the following century, following the schism between Sunnis and Shi’ites, Oman was one of the rare regions that took another path, and soon became the principal region of Ibadi theology, r.During the time of the Ayyubid dynasty, Omanis took control of the major Swahili ports of the east African coast: Mombasa, Kilwa, Zanzibar and Pemba, which certainly explains the great similarity of gestures between the Sufi rituals of Zanzibar and of Oman during the Mawlid, the celebration of the birth of the Prophet. The influence of songs and gestures of the pearl fishers are also affirmed in this ritual.