MASTERS OF THE HARP 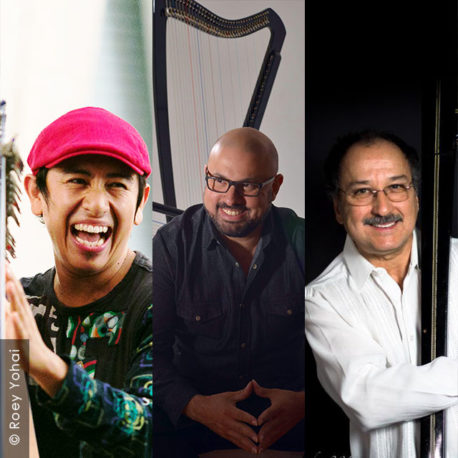 MASTERS OF THE HARP

You can hear that from here: the violins mimic the sound of the wind, the glockenspiel that of dancing elves, the harp that of the moon. For in the composer’s memory, playing the harp was always about evoking moonbeams!

The origins of the harp date back to Mesopotamia (Sumer, 3500 BC). It is a universal instrument that has spread across all continents in different forms, and appeared in Europe in the Middle Ages associated, in Christian iconography, with the biblical image of King David.

South American indigenous music is above all essentially vocal music accompanied by drums and flutes. The arrival in the 16th century of the Conquistadors and Spanish Jesuit priests marked the addition of new instruments such as the arpa llanera, an Andean harp or harp of the plains, constructed to be easy to carry and quick to be adapted to the location. Demonstrating the holistic vision of man with nature, this instrument, an emblem of the musical heritage of the whole Andes Cordillera, was used for rituals performed according to the indigenous peoples’ agricultural calendar and is still used at festivals and celebrations around the traditional, passionate rhythm of the joropo, evoking the gallop of racing horses.In this Pan-American musical odyssey, Edmar Castaneda – one of the most authentic artists in New York today – carries us to the Colombian plains towards the heights of the Altiplano and to the depths of Paraguay. He invited Mariano Gonzalez Ramirez and Eduardo Betancourt to emphasise, with refinement, the evocative power of Andean music, invoking both the windswept, dizzying passes and the overwhelming silhouette of the mountains. Edmar Castaneda, a charismatic musician, takes the harp out of the secondary role it plays in western orchestras and allows it to open the doors of contemporary improvisation, while still retaining its organic Andean sound. Thus, he revolutionises the prejudices surrounding an instrument one thinks of as less rhythmic and, being at one with his favourite instrument, the thousand-year-old harp takes on unexpected colour and explores unknown sacred territories under his disconcertingly dexterous fingers. The sublime energy of these three virtuoso harpists celebrates the joy of existence, alternating between frenzy and sweetness, flights of percussive strings, cascades of innovative sounds and angelic atmospheres.