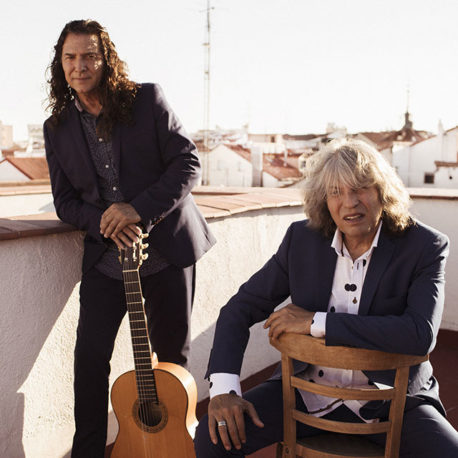 The guitar makes dreams cry. The crying of lost souls escapes from its round mouth.
And like the tarantula, it weaves a huge star to catch sighs that float on its black wooden tank.
Cante Jondo Poem, Graphique de la Petenera: The Six Strings
Federico Garcia Lorca
With José Mercé and Tomatito, here we are at the heart of the flamenco epic poem. With two legendary men from two of the greatest gypsy dynasties of Jerez and Almeria. Two lives that have transcended the limits of tradition, a tradition that forged, sculpted and exhorted them to sing cante jondo with the intensity of life, of their lives!
Independently of their dazzling careers, José Mercé and José Fernández Torres – known as Tomatito – have returned to their roots and have not forgotten the difficulties that marked their paths after the enthusiasm of the first stirrings of their passion. Tomatito swiftly followed in the footsteps of Paco de Lucia – who gave his penultimate concert here at the Fes Festival in 2013 – and like him, accompanied the great Camarón. So, it is one of his pupils who is here on this magnificent stage of Bab Makina and one who has in the meantime become one of the great iconic figures of flamenco. Tomatito remembers ‘at the time where I lived, all reference was to Paco, for all of us and for those who came. As far as I’m concerned, I’m always careful not to repeat the same falsetas. I always try to do new things. To offer something new, especially when thinking about the young people who will follow me.’
Born in the well-known flamenco quarter of Santiago in Jerez, José Mercé is a great grandson of Paco de Luz and nephew of Manuel Soto ‘Sordera’, and is the patriarch of local flamenco. When he was just a child, he sang at the choir school of the Basilica de la Merced, from where he takes his stage name.
The cante jondo, more than any other vocal style, has the ability to leave us, with its brutal stop and silence, on the threshold of a chasm: this is the llanto, the first signs of the non-existent sob that precedes the ‘rolling silence’ so well described by Federico Garcia Lorca.
Masters of an indisputable variety of styles, José Mercé and Tomatito can navigate from the rumba to a zambra dedicated to Lola Flores, the great actress, singer and dancer from Jerez de la Frontera, from the fandangos of Huelva to a bulería por soleá or a siguiriya.
Their work together has been fused in a remarkable album, De Verdad (Truth): ‘We called it De Verdad because it comes from the heart, from emotion and the soul. We want to remember our origins from our time in the tablaos’ (flamenco venues). (José Mercé)
And so, through these two incontestable figures, the miracle of flamenco is perfectly expressed in their ability to retain the vivacity of that first cry directed towards the stars.