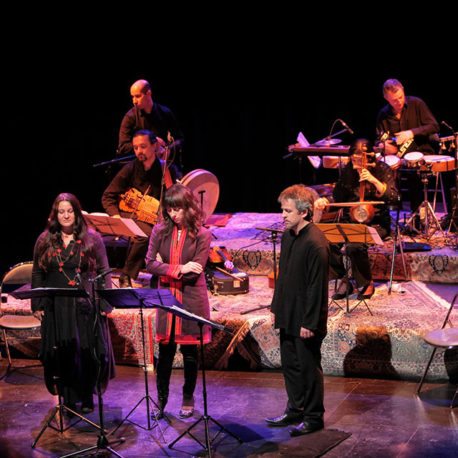 My orange, my pomegranate, my lemon, my candle of night
The Egyptian pharaoh of my heart, my prophet Joseph, my everything,
My Istanbul, My Karaman, my love worth all of Anatolia and of Greece,
My Bedachan from the mines of precious garnets, my Baghdad, my Khorassan,
My woman with beautiful hair, with arched eyebrows, with sparkling eyes full of discord,
I am mad for you!
Suleiman the Magnificent

In rediscovering and interpreting early music repertoires, Canticum Novum weaves a thread between western European music and the music of the Mediterranean basin, celebrating the union of the Christian world with that of the Jewish and Moorish heritage of the East. This becomes a human adventure that continually questions identity, orality, transmission and memory. To achieve this, the ensemble draws on not only Mediterranean repertoires, but also Afghan, Turkish, Persian, Arab, Sephardic, Armenian and Cypriot music from the 13th to the 17th centuries. These forms of music, at the crossroads of paths, cultures and artistic expression, are still wondrously vibrant after 800 years of sharing, have an uplifting energy and are a true witness of diversity, respect and tolerance.
Under the reign of Suleiman the Magnificent, the Ottoman Empire was at its height: his army and janissaries were feared across Europe and Istanbul amazed the western world. For Suleiman, the Sublime Porte not only had a privileged strategic position in trade and war, but also a vocation to bring together the cultures of East and West. Indifferent at first, these two worlds became curious about each other, seduced, fascinated and finally open to reciprocal influences. The concert Aashenayi reflects this cultural exchange and proposes a journey between East and West on the borders of ancient and traditional music. Echoes of Persia, Turkey and Europe are melded in the inspiration of the musicians – French, Turkish, Afghan, Algerian and Armenian – all inspired by the same energy.