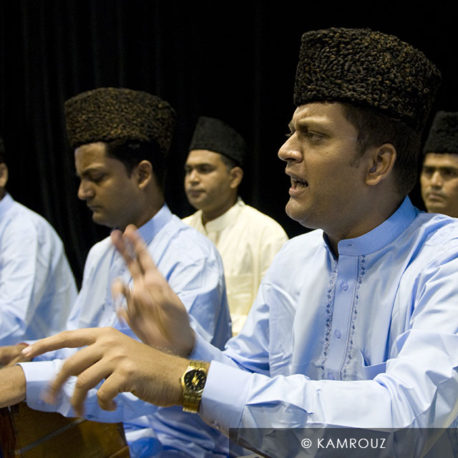 For other doctors he has no need

We do have God among  us, and for the sea have no need

Born from the most ancient school of music of the sub-continent, the Qawwals Bachès Dehli Gharana of Karachi was founded in 1276 by Hazrat Amir Khusro (1235-1325). Subhan Ahmad Nizami is the youngest virtuoso of this most renowned gharana (house). Son of the great Maestro Ustad Afaq Ahmab Nizami, Subhan is thirty three years old and has already been brilliantly managing his group for twenty years.  His ancestors’ area of specialization has remained, for eight centuries now, vocalist classical music. His family have scrupulously  preserved this art whose secret they have received from father to son since Mian Samaath, the first student of Amir Khusro, up to Subhan, his thirty third direct-line descendant. His deep knowledge of Hindustani classical music, has been a jewel in its box for sublime texts crafted and composed by Amir Khums or other geniuses all through  centuries, have conferred this institution an exceptional place in Hindustani music. Subhan owns some 2,000 ancient texts, some of which have been written in languages that are now extinct like ancient Sanskrit and Persian,  Still, he is extremely creative and able to intelligently  blend his creations, of a traditional inspiration, with Arabic and Persian music, among others. His repertpoire includes poems by Hazrat Amir Khusro, Hafiz, Rumi, Allama Muhammad Iqbal, and many other ancient and modern poets who wrote in Hindi,  Urdu and even Punjabi.