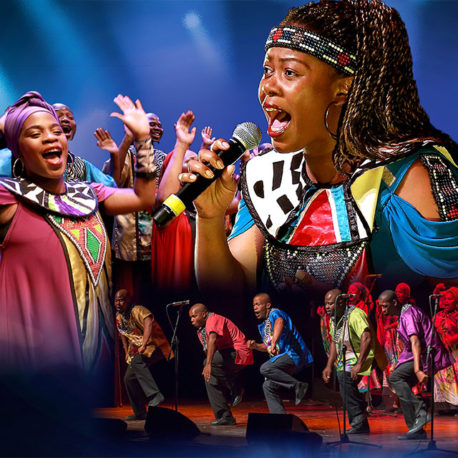 Sing to him a new song, play skillfully and shout for joy.

The depth and perfection of voices, the fascinating power of dances, in particular the Zulu warrior leg forward-thrust, and the sparkling of colors are all features of the Soweto Gospel Choir that contribute to celebrating a joyful and elevated spirituality.

Exalted when they sing their faith, hilarious and exhibiting acrobatic tonicity when they perform as dancers or even comedians, this group of thirty odd multivalent artists master their craft with perfection.

In South Africa, vocal music boasts a preponderant status. From Zulu vocal polyphonies to the songs of migrant workers, it infiltrates everywhere. During the last years of the Apartheid regime (1948-1991), the crowds of demonstrators used to sing claimant slogans in chorus (toiy-toiyi, a singing practice that originated in Zimbabwe and that dictator Robert Mugabe prohibited in 2004). In the churches, sects are numerous in South Africa (4,500 different churches) as is the case in the whole of the African continent, and so are choirs. That is where Gospel has found  fertile ground for development. European and American hymns have mixed with local cultures and languages. Thus, Gospel has become the most popular and the most sold and consumed brand of music, in particular by male members of the black population and also by Afrikaners.

Ever since its creation, in 2002, the Soweto Gospel Choir has developed a brilliant career all through the world. It has recorded six albums, of which two have received the American  Grammy Award, In South Africa, a number of observors have been talking about financial success for the producers, but not for the artists who are said to receive ridiculously low fees. In 2004, The Soweto Gospel Choir, whic is sponsored by Archbishop Desmond Tutu, 1984 Nobel Peace Prize, has set up its own foundation, the Nkosi’ Haven Vucani which suports South African children made orphan by AIDS. In 2003, the choir also participated in the first 46664 (this figure being the number of Nelson Mandella when he was in prison) concert in favor of combating AIDS.

(Extract from an article by Patrick Labesse in Le Monde Culture)