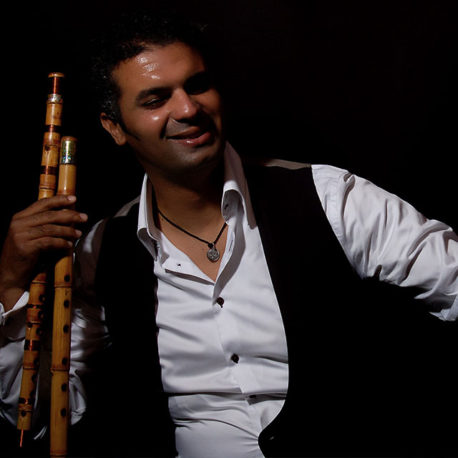 Rachid Zeroual, who was initiated to music at a young age by his father, had a passion for nay very early. Soon, eminent musicians recognized his talent and the way he played with great sensitiveness;  so they asked him to perform with them. Rachid Zeroual produced his first album The breath of the soul, a product of intensive research on Moroccan music and its Amazigh, Roman, African, Arabic and Andalucian origins. He came across scenes from  Arch Sheep and Jean-Michel Jarre while he was proceeding with his career as solist and set up his own quintet with which he was invited to perform in famous festivals. A member of the Royal Orchestra, he was twice decorated by UNESCO. Through the weed of the nay, the wind becomes  celestial and heavenly breath, while through that of gasbah it  becomes a fierce mountain thunder.  Every time, nature and the divine seem to get closer.