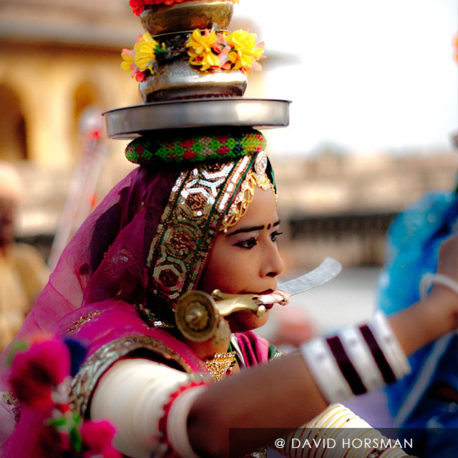 The Teratali dancers and singers (tera : twelve, tali : rhythms) are the small colorful goddesses of Rajasthan temples, whose dance is one of the most extraordinary dances of India, is blended with the sacred and the ritual of ordinary daily life. With exemplary precision, two manjirat small cymbals attached to the hand with a long thread spin around in the air and bang together  (chhut manjira), against other small cymbals attached to the forearms and calfs of the Kamad caste. The latter is linked to the Meghwal, the weavers, and also tanners of Rajasthan.

Just as the light of the sun reflects on the moon, a candle light brushes the surface of these cymbals, bewitched by their cosmic spinning, with a saber (talwar) between the teeth. This magic ceremonial is a worship rite (bakhti), dedicated to Baba Ramdev, the great saint whose life is celebrated by  the poet, who accompanies the danse with a tanbûra  (tandûra in Rajasthan), , as well as that of Kabir, himself the greatest Indian poet, member of the weavers’ caste.  Both a Vishnuite Hindu and a Sufi Muslim, but also linked to a Shivaite Natha Yoga and Gorakhnate of North India, he used to preach non-violence.  Thus, Ahimsa anticipated Mahatma Ghandi, in addition to his relationship to the Indian dhoti  and the cotton shawl.