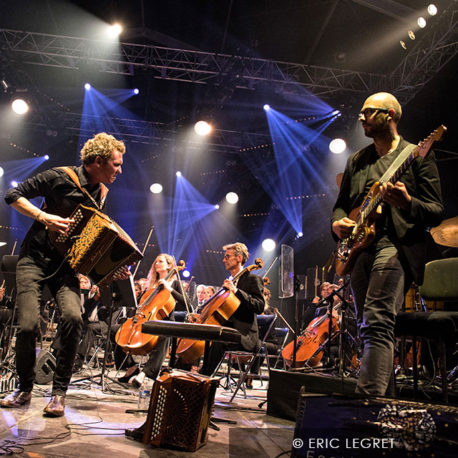 Major figures of Breton dance music, Erwan Hamon and Janick Martin proposed to the Symphonic Orchestra of Bretagne to partake in one of their  adventurous getaways. They were accompanied by the Breton great voice of Anne Ebrel, of guitarist Gregory d’Argent and of percutionist Antonin Volson,  and the challenge was a major one indeed : they had to achieve limpidity in rhythmic and musical entanglements, supporting a panting energy with power, disrupting measure without ever breaking away from tempo, performing repetitive and circular tones while constantly preserving the very essence of Breton dancing. A successful challence, this is a real symphonic fest-noz to which you are welcome.