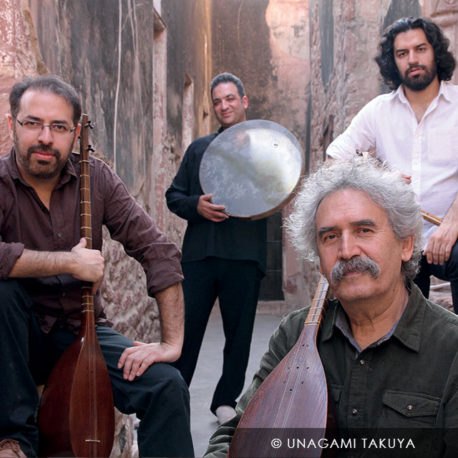 I am the atom, Iam the globe of the sun

I am the glimmer of dawn, I am the breath of the evening

I am the whisper of the hedgerow, the rippling mass of the sea

Iam the spark pf the stone, the golden eye of metal

Rumi : The Great Book of Wisdom

At the beginning of the 80’s, Kaykhosroh Pournazeri created the Shams (sun) ensemble after Shams Ed-Din Tabrizi, the wandering master of Rûmi (XIIth Century) in Kermanshah. The virtuoso of  Iranian tandur-luth with  a long shaft and two or three strings illustrates the duality of this region of Western Iran where profane Kurd repertoires are to be found side by side with the ritual music of the religious order of Ahl el Haqq (the people of the truth), still called yarsanism. Kaykhosroh Pournazeri  chose this spiritual instrument with an ethereal sound so as to push back traditional Iranian music in its retrenchment and, thus, give this instrument another interpretive dimension.

The use of tanbur was adopted and encouraged by the greatest singers of Iran. Kaykhosroh Pournazeri was followed by his two sons Sohrab and Tahmoures who, today, represent the third generation of musicians who defend this instrument. Pournazeri has set his family in a fundamentally real dynasty for the transmission of Iranian traditional music.