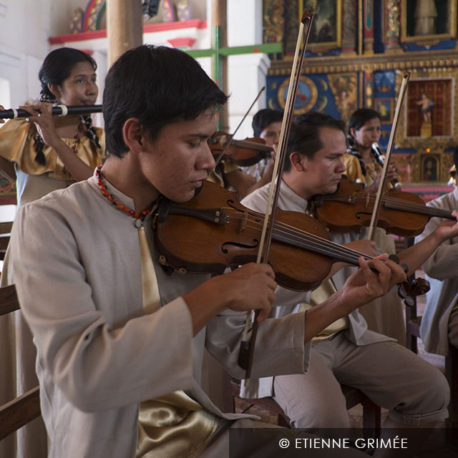 Whenever the spirit from God came on Saul, David would take up his lyre and play.  Then, relief would come to Saul; he would feel better, and the evil spirit would leave him.

Moxos ensemble originated from the school of music of San Ignacio of Moxos village, an ancient Jesuit misssion of the Bilvian Amazon which has been, up to now, the cultural and religious tradition that is a legagy of Jesuits ever since its foundation in 1689.

Moxos are a native people who live around the Rio Mamoré, major source of the Rio Madeira North of Boilivia. Speaking a language similar to that of the Arawak, they submitted to the Incas but managed to repel the Spanish in 1564. However, one century later they welcomed the Jesuits and converted to Catholicism. They numbered 30,000 at the beginning of the XXth Century.

The Jesuit missions have always stirred dreams. Two large mission centers have existed in the territories of present Bolovia : that of Moxos in the Beni district and that of Chiquitos in the north of the Santa Cruz district. Nowadays, some of the Moxos missions (Trinidad, San Ignacio and San Borja) have been drowned by the successive floods and the misdeeds of moden architecture.

However, every year in San Ignacio and Moxos, one of the most beautiful celebrations in Bolivia is held around the 28th of July in celebration of  Saint Ignacio.  This is an opportunity to enjoy the warrior dances of Amazon with a wealth of masks, particularly the los bajones, as well as some of the biggest Pan flutes in the world.