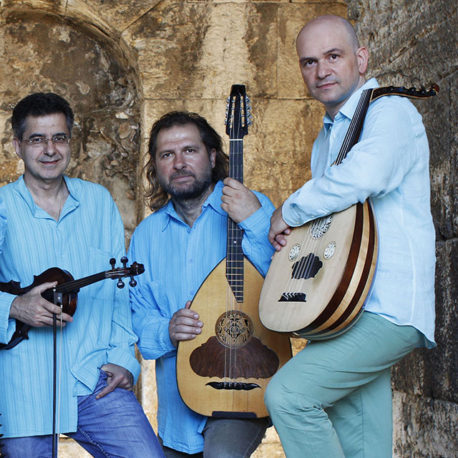 Originally from Thelassoniki, the En Chordais ensemble presents Greek music as the true cradle of an Oriental and Occidental Mediterranean. Greek music has been enriched, in a complex manner by other traditions of the Mediterranean basin. Such mutual contributions have made possible the astounding radiance of classical Greek music from which have emerged religious byzantine music and a secular, scholarly and popular music of a tremendous diversity according to the regions and islands.

En Chordais also represents a major itinerant journey through  the musical high places of Europe and the Middle-East. Since  quite a number of years now, important musicians from the Arab world, Turkey and Iran have been involved in the work of En Chordais, thus setting up a rare example of transcultural Mediterranean traditional musical laboratory and workshop. The ensemble rhyhms, and repertoire, and the interpretations are the constituting components of a great work of quality. Each of the ensemble concerts provides an opportunity to uncover this historical diversity and the crucial era which made Greek philosophy gradually become the genesis of philosophical Arabic thought.