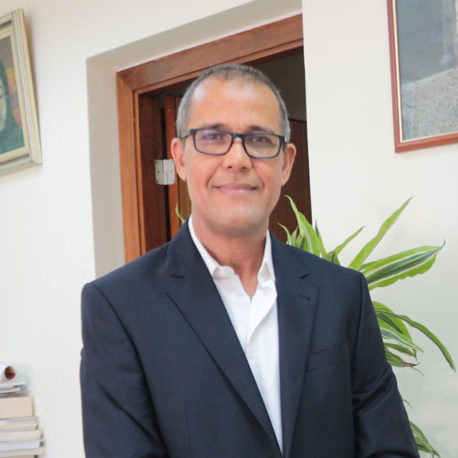 A native of Errachidia (Tafilalet), Abdelouahed Ben-Ncer is a university professor, author of several publications related in particular to paleoanthropology. Besides, a number of positions, starting from 1995, his career has been punctuated as curator of the Rabat Museum of  Archeology, Director of Studies at INSAP, deputy director of INSAP, and research officer in the office of the Minister of Culture. However, all these positions have never prevented him from breaking away from teaching and research inherent to paleoanthropology. As a matter of fact, the research work that he has been undertaking  at the paleoanthropological site of  Jbel Ighoud (Youssoufia Province) is but evidence of this.

The relatioship that he has always entertained with this site has not in any way receded since he undertook his first visit of evaluation of its potential, with the view of initiating archelogical excavations. This goes back to 1993, that is almost immediately after his nomination at INSA           P as teacher researcher. Unfortunately, the necessary conditions for undertaking such work did not materialise at that moment.

It was only in 2004 that happier circumstances led to a cooperation project between INSAP and IMP-eva which was was set up to eventually initiate important excavations in the site, under his coordination and that of  Jean Jacques Hublin. Ever since then, a series of opportunities have led to the extraordinary discover that 300,000 years is the age of our species Homo Sapiens. Such discovery is owed to this archeological site.  Moroccan archeology has thus realized tremendous growth, which has earned  Abdelouahed Ben-Ncer the Royal Decoration Wissam Al Kafaa Al Fikria on the occasion of the 2017 Throne Feast.